Use us to handle the details and work of managing your Northern Virginia rental property while you enjoy life.

Management of your McLean rental property involves many facets. As the process flows from one stage to the next, our team works together to ensure nothing slips through the cracks and you are kept updated.

Our business is to provide you with management solutions that help your property operate smoothly, increase its desirability and enhance the investment value. That’s why property owners throughout the area depend on us to help achieve their goals of property performance and profitability. Whether your property is a condo, townhome or single-family home, we ensure that your property is well managed to attract and retain great tenants.

Start getting the returns you deserve today! Complete the form to the right to schedule a property consultation, or get started with your Free Rental Analysis below!

When you work with us, your Property Manager will be your “go to” person during the management process. They will not only be the dedicated point of contact for you but also for your tenant and all vendors. Their focus is communication between all parties to answer questions, resolve issues just facilitate a great situation for everyone. Our entire property management team will handle other necessary functions to support the property manager, you and your property. So we want to make it easy for you – when you have questions, you reach out to your Property Manager who is the person who has the most knowledge about your property and they will get the answers. LEARN MORE >

As a rental business owner, your property is your product and it’s our job to get your product to rent quickly and for the best price possible. Our 7 step marketing plan ensures that we will get your home rented quickly and minimize any vacancy – saving you money! We work hand in hand with you to give recommendations on updates and improvements you can make to the property to attract the best quality tenants in the shortest amount of time. LEARN MORE >

Take time to get the right tenant! Yes, we all want to get the property rented fast but we need to do it right! This step is so important. Getting the right tenant into your property sets the tone for the entire tenancy and can help create a good experience versus one that is stressful and frustrating. We always say it’s better to get the RIGHT tenant than just a FAST tenant. LEARN MORE >

Collecting rent sounds simple right? It is when tenants pay on time but when they don’t we know the necessary steps to make sure they pay or get the proper notices they need at the right time. If tenants have gone beyond the grace period of the lease we provide them with a pay or quit notice. In addition we have to assess and collect the appropriate late fees. Worst case if they still don’t pay then we need to start talking about eviction. LEARN MORE >

Our property managers handle all maintenance and emergencies during business hours. After hours We have a contract with a trained call center to handle emergencies after hours and on weekends. So there will never be a time that the tenant cannot reach someone if there is an emergency. LEARN MORE >

The tenant is your customer and it’s our job to maintain a great relationship with them, keep them happy and still enforce the lease terms to ensure everyone is doing their part. From the time the tenant moves in until they move out, we deliver a high level of customer service so they feel taken care of. LEARN MORE >

We do several inspections over the course of the lease term. Inspections are critical to keep on top of potential problems and ensure that your tenant is complying with all of the lease terms. Before a new tenant moves in whether that is just when you are leaving or between 10 and turnovers we do a detailed move in inspection to document the condition of the property at that time – the lease start date. LEARN MORE >

When a property gets turned over in between tenants it’s a process that must be handled with good planning and quick action. Often times there is work to be done in between and we don’t want to have too much vacancy time so we need to plan and coordinate and schedule any and all work to be done in advance. LEARN MORE >

Our property management system, Propertyware, allows you to access your owner portal anytime you know our owners are all over the world in different time zones and countries but everything you need to know what’s going on with your property will be housed in your owner portal. LEARN MORE >

Part of a job as your rental property business manager is to make sure that we accurately document all things financial related to your property. Every month you will receive a monthly statement along with your rent proceeds for that month. LEARN MORE >

Reducing risk is another thing that a good business manager will do for their clients. We see all kinds that sometimes you may not even be aware of because you don’t do this every day. We stay current on tenant landlord law changes and contract changes so that we can be sure that we do things right to protect you. LEARN MORE >

REDUCING
YOUR RISK
AND MORE

Find Out How Much Your Home Will Rent For With Our

McLean is a Northern Virginia city located between the George Washington Parkway/Potomac River to the North and the town of Vienna to the South. McLean is a community that is home to many diplomats, Congress members, and government officials due to its proximity to Washington, D.C. and the CIA.  Additionally many businesses and large companies have offices in the Tysons Corner area of McLean.  Among them, are the headquarters of Capital One, Booz Allen Hamilton, and Freddie Mac.  Tysons Corner is also home to two large, high-end shopping malls.  (It is also the location where Apple Inc. opened their first retail store in 2001.)

For all of these reasons, McLean land values are among the highest in the DC area.

McLean is the location of Hickory Hill, the home of Justice Antonin Scalia, and the former home of Ethel Kennedy, the widow of Robert F. Kennedy. 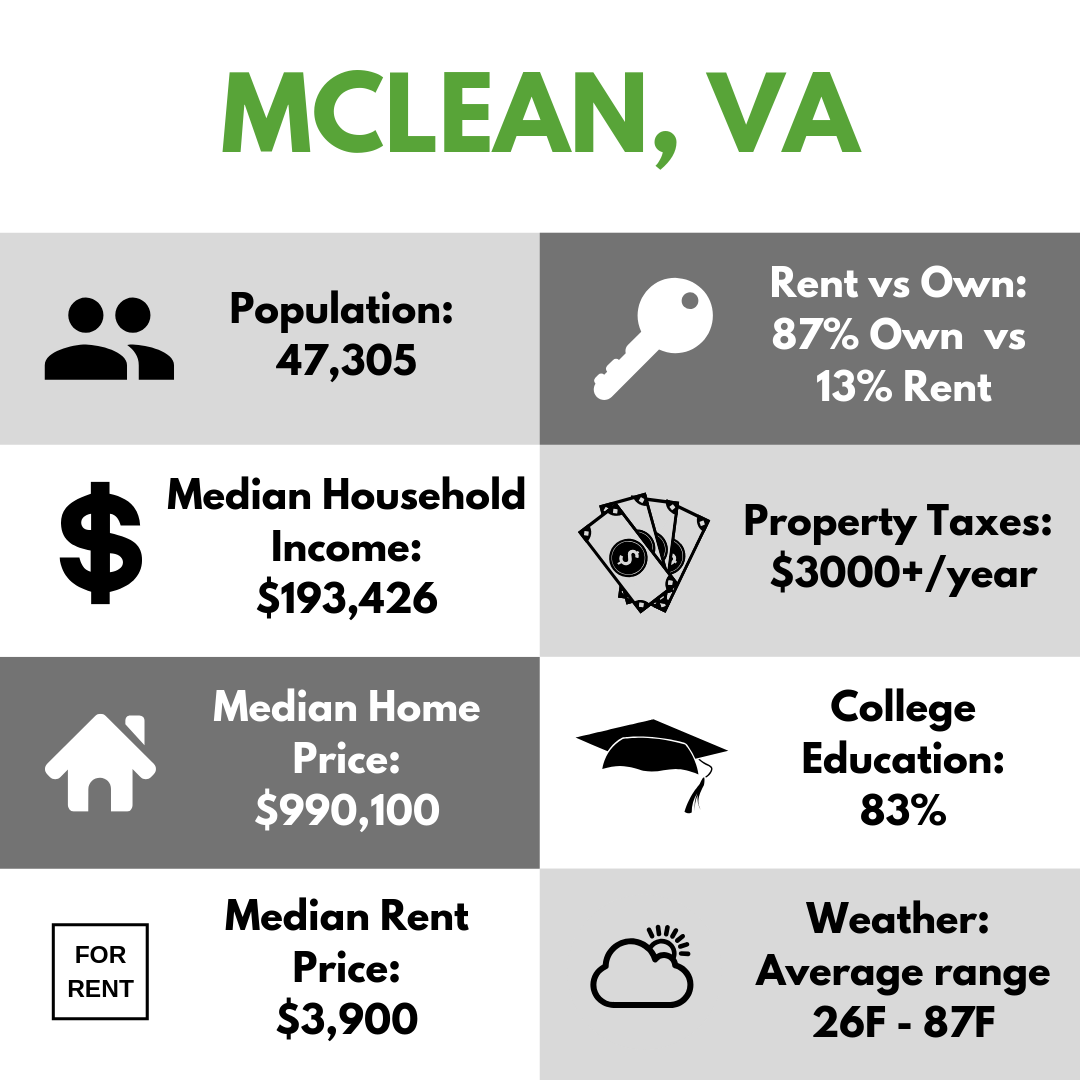 WE ARE PROUD TO OFFER THESE GUARANTEES

are you maximizing your
investment’s potential?